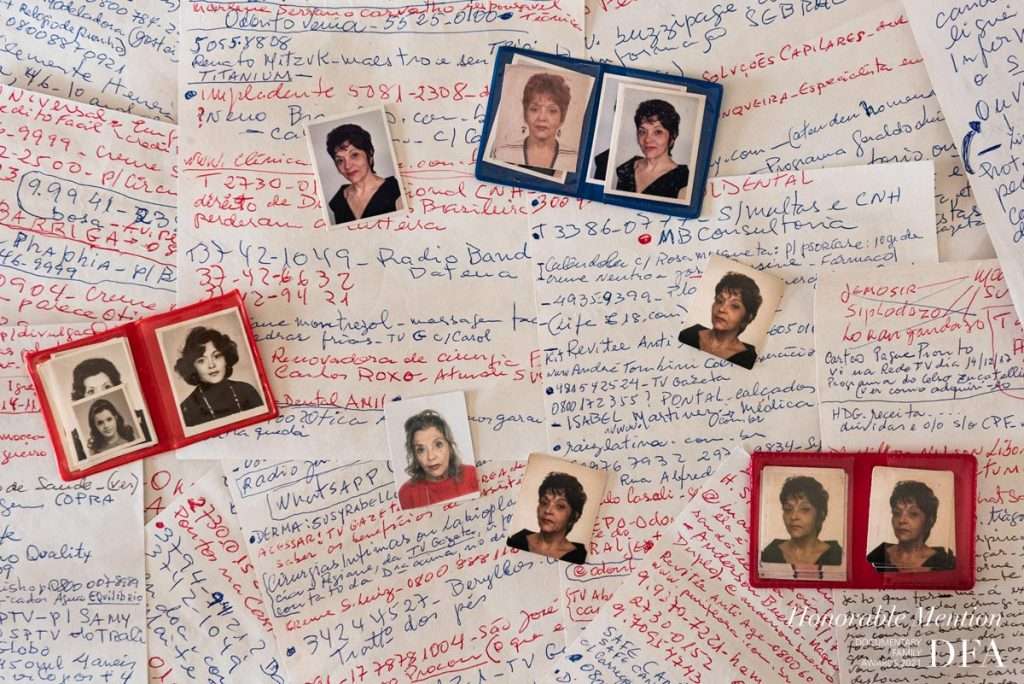 Behind the Photo
·3 min read

Behind the Photo with Fernanda Luz

In this photo I wanted to tell you a little about Dirce, my maternal great aunt. In the image you can see 3 or 4 photos of her with years of difference and some similar, we see how her hair and her appearance have changed, in the background, many annotations, but a lot of it, in the photo there are only a few.

At the beginning of 2020, exactly a year ago, it was when she passed away, she was already very old and she always lived alone, she had no children or company. She got sick over time, she always felt depressed … “Cris, you are going to take care of my things when I go …” was what she said to my mother when they talked on the phone a while before she got worse. She lived in São Paulo and my mother in Ribeirão Preto (300km from SP), the pandemic had already arrived in Brazil and everything was closing. One day at night my mother called me and said she was going to the capital to help Dirce, who was very bad and needed someone to accompany her to the hospital and she went, but after a few days she passed away. No funeral, no farewell.

After a while, my mother and I went to her apartment to empty a lifetime, at least that’s what I felt. There were days looking at things that were no longer meaningful and yet I tried to portray what her life was like. I didn’t have a great connection with my aunt and it was at that moment, to keep what was important, to throw a lot of things away, that I learned more about her life. I saw the books, the magazines and newspapers from the 80s that she kept, we found letters from friends, photos of lovers with the words “monster”, graduation album in Law, new clothes with tags and other very old ones almost falling apart, and many things that lost use a long time ago, but she kept it. It seems that anything that entered that apartment remained there, no piece of paper was wasted, as you can see in the image, there were papers and papers found, in the drawer of the living room shelf, in the kitchen cupboard, on the bedside table, in two other small cabinets that she bought just to put these papers on. It was notes after notes of things she watched and took information to do later.

I was connected with the things that Dirce left in her apartment. My mother and I threw a lot of stuff away, keeping just the things that were important. We spent four days organizing and I was trying to portray her in one single image, and the notes that we found around the apartment kept my attention. The photo was already built in my mind and I almost didn’t do it. But before we threw things away I took the notes, the little photos and made it. That was the best thing I did.

What meaning does this photo hold for you, and what do you think it means to others?

This image is not what people expect from a family portrait or documentary family photography, but it is. There is so much mystery for those who see it for the first time, they have more questions than answers and when this happens is a picture that has power. Some people that I know told me that this image captured their attention really quickly and it’s memorable.

It is different, there is no happiness, no smiles, people portrayed as we imagine and even then, there is a lot of history behind a single photo. Many years have passed and we recognize them in small document photos. On the other hand, there are the daily notes that show other aspects of my aunt’s life, I can’t photograph her now and I never did that, and now that she passed away, I photograph her traces, her remains, it’s a posthumous portrait.

This photograph brought me some awards, challenges, self-evaluations and possibilities for other people to judge as well. I almost didn’t take the photo and could have lost so much knowledge and exchange of experiences. A photo that was built and that tells me so much about someone who is gone. My goal was to tell a little bit of Dirce’s history and leave a legacy for her and it feels like I got it!