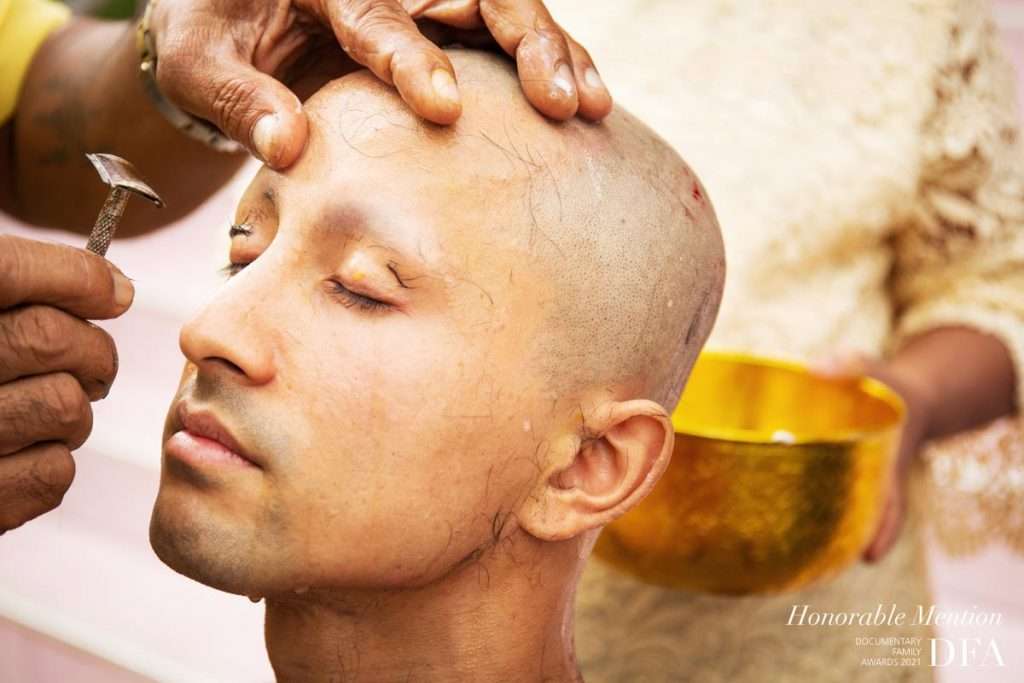 Behind the Photo
·3 min read

Kema-Chitto is the chosen name of Sun Phitthaya Phaefueng, given to him by the monk master during his one month monkhood. Sun was born in Thailand, with Thai-French blood, and later raised in Norway, separated from his mum and family.

During the 1960’s and 70’s, the number of ‘luk krueng’ (mixed race) children in Thailand increased significantly, due to an influx of western visitors to the country. While many of these children were born into happy families with loving parents, many more were born illegitimately, as a product of short term relationships and/or prostitution. Sun is now working as a contemporary artist, based in Thailand, and travels the world telling his story through his engaging solo performances.

This photo depicts one of Thailand’s most revered traditions; it is believed that every man should be ordained at least once in their life, not only to explore the principles of Buddhism, but also to show respect and gratitude to one’s parents. After returning to Thailand to reconnect with his mother, Sun was keen to explore this and decided to ordain. The purpose of the ordination was to commemorate his mum’s past suffering and to gain a deeper understanding of peace of mind, love and compassion. This has also played a vital role in his research in sex work, LGBTQ and veganism.

This photo and the series it is a part of were shared with his mum and family in one of Thailand’s northern-central provinces, bringing blissful moments to a small town in Petchabun. The monk master deliberated hard before deciding on a suitable name, but eventually settled on ‘Kema-Chitto’ which simply means ‘A Grateful Spirit’.

It was all about the spiritual and emotional connection between me and the subject in the photo, Sun Phitthaya Phaefuang. I met him coincidentally at a rooftop bar in Bangkok while he came to perform his Voguing at the Vogue night and we became good friends.  Sun is the pioneer Voguer who started the Ballroom scene in Thailand. At the same time that I began my fascination with ballroom culture was the time when he planned to be a Buddhist monk in around a month. So, we were exchanging our knowledge from our expertise.  Luckily, he’s also an artist and quite open in public about his life. He has been researching and experimenting many things and also connection between himself and his mum on a deeper level. I found that fascinated me a lot.

How did this photo come together for you? Were there challenges that you experienced in the process?

The experience was quite fluid actually, everything just went with the flow, maybe because Sun was also an artist so he understood what I was doing and was giving me a chance and the freedom to explore my ability again through his event. The only few challenges I had were in the post process when I was clarifying the narrative of the photo series that this photo was a part of, to reflect my interpretation of Buddhism tradition.

Does this photo hold personal meaning to you?

Personally this photo was very meaningful to me from many points of view, it actually has a lot of meaning in it.  I wanted to share my own opinion about beliefs that relate to the culture and beliefs in the country where I was born and raised up. It’s questioning back to the social judgement and getting myself inspired again on a personal level.

If you really see the details of the photo, the shot of Sun being shaved has a few hidden symbols of the conflict in the process of ordination that I wanted people to be curious about. Moreover, in the photo series that this photo was a part of, I also wanted to show the transformation of classes from being a normal class (before being a monk) and after you become transformed to be a monk as well.

Siwanat’s photograph won an Honorable Mention in the Faith & Religion category in the Spring 2021 Awards.  The story behind the photograph was written in part by Daniel Karl Watts.  Follow Siwanat on Instagram @weridescape