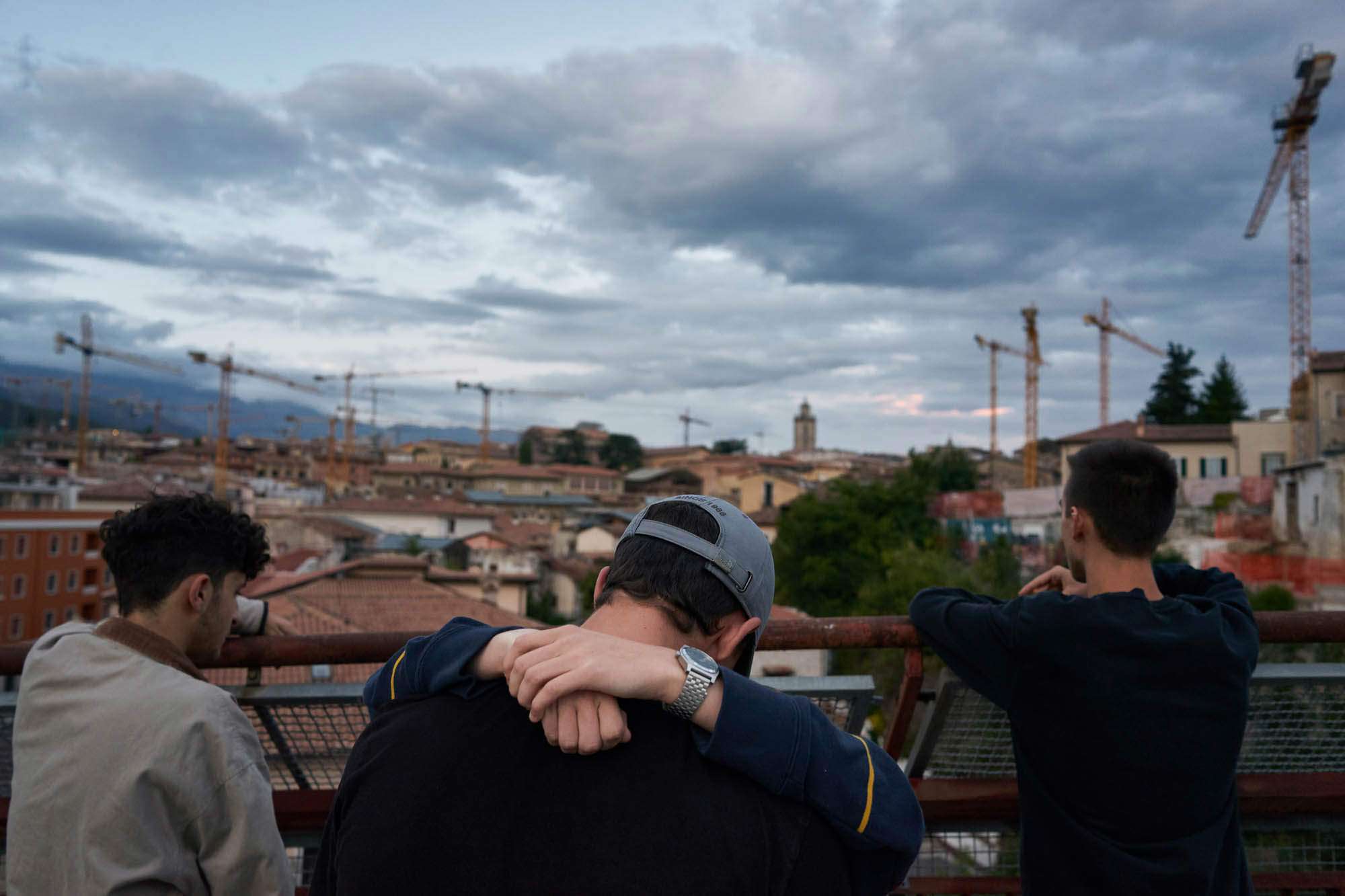 Behind the Series with Danilo Garcia Di Meo

What is the story behind your winning photo series?

Quatrani (kwah-trah-nee) means “youngsters” and it is used in the Italian city of L’Aquila. It has been more than ten years since the earthquake that shook these lands in 2009, causing people to end up homeless, injured or dead. The children of what it is known as “The Forbidden City” are now more than 18 years of age. They have grown up without structures, landmarks or meeting points. In spite of everything, the group of boys in this series found their own place thanks to their deep and solid relationship that was fueled by shared experiences and the sense of lack as well as their emotional and social resilience.

What compelled you to want to tell this story?

I went to this city for the first time for an assignment on the conditions of the suburbs (which were very affected by the earthquake) and to record the testimony of children who grew up without a city in The Forbidden City. The most important meeting was the one with Enrico, one of the protagonists of the story, and his mother Barbara, who hosted me from the first day in L’Aquila.  Since that time we have bonded very closely and they have become an adoptive family for me.

How did you find this particular group of youth whose story you share?

I met this group thanks to Enrico’s stories, he talked to me about their activities, about their “taking back human bonds” and living the street life in the healthy sense of the term. Not knowing L’Aquila, I initially thought the boys were more isolated than they were, since their generation lives more connected through social media than in real life.

How did you gain access to their lives and begin the process of photographing them?

Before starting to photograph this group I talked a lot with Enrico and Barbara. Enrico talked to me about the activities that the kids did (from skateboarding, to rap music, to trips to the lake) and Barbara told me about how adults (parents, grandparents, teachers) in the years after the earthquake were careful to unite this group of boys as much as possible, keeping them away from the risks of the moment. Then I proposed to both of them the idea to start a story about teenagers, since in L’Aquila there were already reports by great photographers from all over the world, but only on the reconstruction and destruction of the earthquake as well as other more conceptual works. This is how I met the boys and I started to follow them in everyday life. I must say that my enthusiasm grew together with their interest, and they felt part of something.

How did the boys respond to having someone want to tell their story?  Did they accept you into their lives?  Did it take time to build trust?

I was very lucky because I was introduced by Enrico to their group. In terms of age I am like an older brother, we have common passions such as that for music (even if with very different genres!) and they connected with my curiosity about and attention towards their lives. Maybe even a little bit of my being always a child and having younger brothers helped me to fit in better .. now I talk almost every day with the boys!

Did you experience any challenges while photographing this series?

The greatest difficulty I encountered was that of knowing how to measure the presence of the city within the work. I did not want to make a journalistic report on the city because there was no need, given the many works already carried out. I wanted to talk about the city through the stories of the children and not through the rubble or the cranes. The focus of the story also came over time. I started photographing these boys because I was intrigued by their emotional resilience, but their precise affective response to the lack of material dimension within the city came out over time. As the months passed I had more and more images of them hugging and kissing, a union that goes beyond the blood bond.

In the project description you share words from the youth you photographed.  Did you conduct interviews?

Yes, I made some audio recordings during some of our conversations and I often jotted down their sentences. For me it was really essential that they be the ones to talk about their experience. My contribution is that of my curiosity through the photographic tool, but the stories are theirs. Since telling a story is an honor but also a burden, I always try to put their words before everything. I consider them to be co-authors of the project.

Did the interviews help you to see the story visually in a different way?  Did they influence the direction of your story, or its meaning?

Yes absolutely, there has always been a high level of honesty and transparency between me and the boys. I often told them, “I would like to make images like this,” but the answer was “this however would not represent us.” There has always been an exchange of ideas between what I was looking for in order to represent the story and what best represented their lives for them. This helped me a lot in being able to get into the story.

What meaning does this photo series hold for you or others?

I am very fond of this work and their stories. As always, photography is the most beautiful job in the world because it allows us to get in touch with realities, people, places that we do not know. We can try to tell a small part of it to people who may not know the story, which is exactly what happened with the Documentary Family Awards. Thanks to you the story of teenagers from a small town in central Italy could be told even far from our continent. I finished collecting some shots in the last few months, at the end of their adolescence, and I hope to be able to make a book of the photographs as soon as possible.

How or why has photography played an important part in your life?

I believe that without photography I would have drawn, with times and methods certainly different from those possible with photos, because visual art for me was a fundamental tool of communication and representation. Perhaps also because when I was a child I was dyslexic, and I therefore found in photography an excellent compensation tool.

On your website it says you’re a social documentarian.  What is it that keeps you wanting to take photos?

I take photographs out of need and curiosity. I was born and raised with cameras thanks to the passion of my dad, who no longer exists today, but who has left me forever with the curiosity of a child in my eyes. I deal with social issues because this is me and these are the aspects of everyday life that I deal with through my interest as a person and then as a professional photographer. I always believe that before the professional, there is the human being.

The photos included along with this interview are from Danilo’s series entry to the DFA. You can view the full series on Danilo’s website HERE. Find more of Danilo’s work on Instagram @danilogarciadimeo