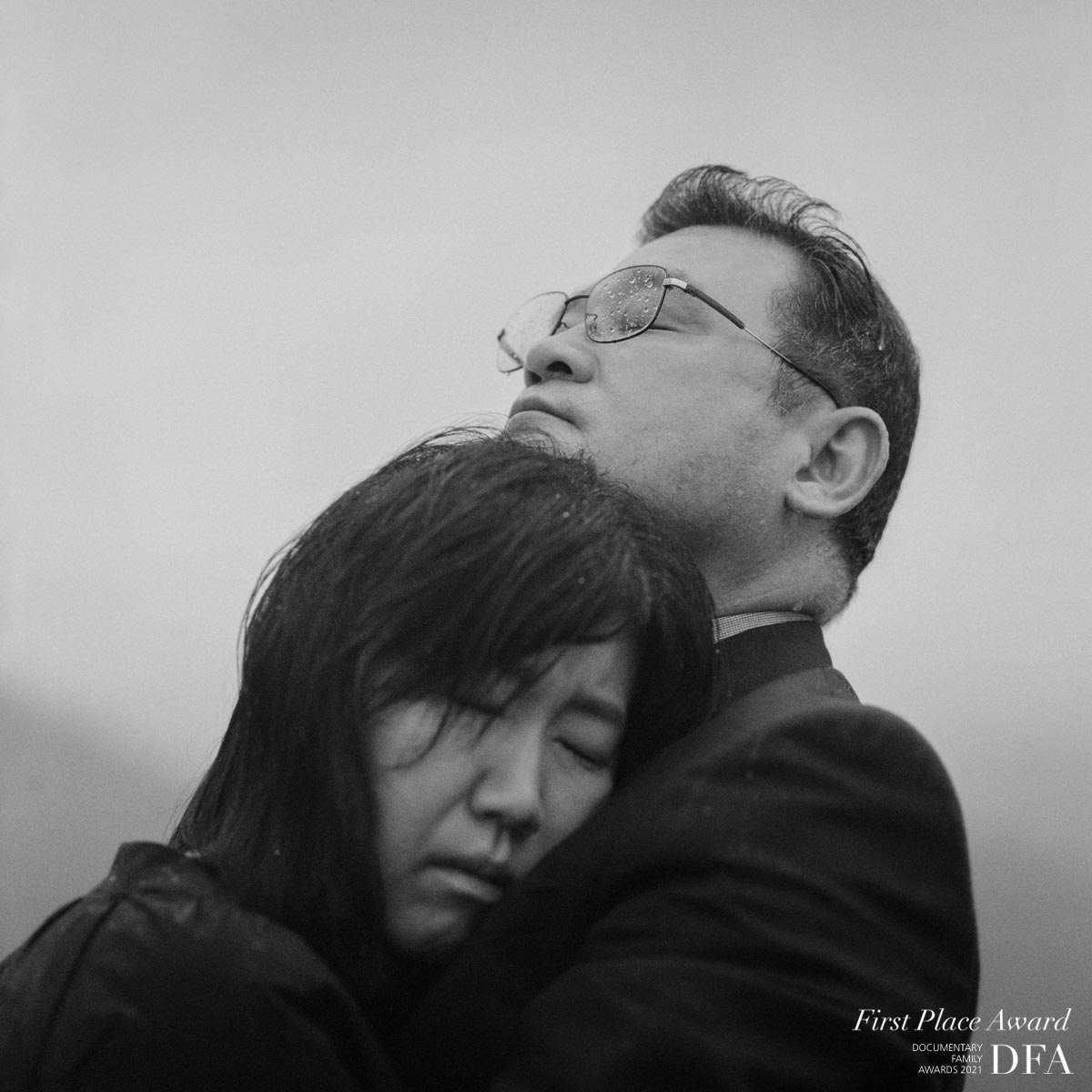 We are proud to share with you the award-winning photographs from our 10th international competition celebrating the very best in documentary family photography.

Award winners were chosen during the final round of judging recorded live from our three judges’ locations at the time in Miami (USA), Victoria (Canada) and Denver (USA). The final round of judging in its entirety was subsequently streamed online over three days from January 24th-26th, 2022. Viewers had the opportunity to watch the unfiltered discussions and constructive feedback as winners were collectively chosen by esteemed judges Carl-Philippe Juste, Jenna Shouldice and Kirsten Bethmann.

The following award-winning photographs have been through two rounds of critical review and selection. Congratulations to the winners!

My dad cries a lot these days. Any sad movie never made him cry before. He didn’t cry when our dog died and when his son shaved his head to join the navy. He also didn’t cry on the day that his dad passed away and his mom abandoned him when he was six years old. And now I see his tears very often. “Men don’t cry.” He said this to me, who used to cry a lot, like a habit. He said I have to learn how to hold tears to be a ‘man.’ When he was a kid, he held his tears to protect himself from people who despised him just because he was an orphan. After he had a family, he didn’t cry to protect his wife and sons from this harsh world. The tears he held slowly rose from his feet to lacrimal gland. And the night the ‘man’ realized that he can’t hold anymore, the tears were already flowing on his cheeks. Now I see dad’s tears that nobody hadn’t noticed filling up inside of him. I asked if I could take a photograph of him when he was crying. Even at this moment, he tries to be a ‘man’. “Yes, but don’t show this to your mom. She will cry.”

“Self Portraits of Motherhood“

Being a mother is my greatest joy. It is also my greatest source of frustration and self doubt. It’s a hard job no matter the circumstances, but the pandemic brought an all consuming form of motherhood. Suddenly being a mother was all that I was, and yet it still seemed impossible to be all that my children needed. The pandemic forced me to examine myself as a mother, to see my strengths and my shortcomings, and to accept myself for the imperfect mother that I am. This series of self portraits is my story of motherhood – the joyous highs, the overwhelming lows, and the fierce love that holds it all together.

“My grandmother and I”

This series is a tender tribute to my grandmother Isabella and my homeland, Calabria. Through self-portraits and old photographs double exposure I try to fix in image our past and my present, now that my grandma is passed away and I’m far from my homeland.

I have very few photos of my childhood. There are only memories that I carefully keep, regularly scrolling them through in my head. I remember the leaden raindrops on the window and my mother’s violets on the cracked windowsill. The morning fuss in the kitchen, grandma’s hands in the dough and the smell of baking. I remember
the steady sound of the sewing machine from the next room and my delight when I was allowed to spin it. The table, littered with picked berries mixed with pine needles, the clanging of empty cans and my hands, stained with blueberries. I remember the huge feather pillows on my grandfather’s bed and the neighbor’s dog barking from the open window late at night. These memories warm me, sometimes I see them in my dreams. They dissolve me, remove the borders. Seeing my daughter grow up, I often get a sense of deja vu from my childhood. Watching her, I begin to remember myself. Then it seems to me that my childhood is not over, I was given a chance to live it again. To keep these feelings, I record them with a self-portraits. This project was started in June 2017. It is going on now…

Meal Pattern is a personal project that explores the similarities between my kids’ clothes and their favourite foods and drinks. Subsisting mostly on snacks, my son’s images include snack bars and veggie straws. My daughter has recently learned to make a perfect hard boiled egg and prefers Kombucha to other drinks. Of course,
they both love ice cream. Inspired by formal portraiture, I used poses that mimic traditional school photos and off camera flash create consistent lighting. I chose a tight crop on their hands and upper body, to emphasize the patterns, colors, and textures found in both their clothes and meals.

“Now is not the right time”

This started out as a story about my father’s suicide attempt. When I was two years old, he went into the woods with the intention of never coming back. This project was an investigation into the traces of a well-kept family secret. While I was revisiting my parents’ trauma – its places, objects and memories that I could not call my own – I found it here, inside myself. My body always knew. This is no longer a story about a suicide attempt. This is about the impossibility of secrets, about what we are sharing when we hide. This is about pain inflicted out of love, about the complexity of silence, and the unexplainable sadness of a boy. Mum, Dad, this is your trauma, that you kept wrapped up in countless colorful blankets and yet unknowingly handed over to me in a loving embrace. I will carry it with care.

In this series I explore the relationship between my two boys and their experience of brotherhood.

This visual story shows an abstract representation of my children’s relationship. Those children are my two dogs. Each frame is filled with body language that displays their affection for each other.

Our preliminary round guest judges evaluated every single submission we received and selected thirty or less of their favourite photo projects to move forward to the live-judging round as finalists. Our deepest thanks to Irmina Walczak (Poland), Julia Chang-Lomonico (United States) and Zun Lee (Canada) for their hours of dedication during this process. Congratulations to these photographers who were nominated as finalists for consideration during the final round of live judging.

Re-watch the live judging for this category

Did you submit to our Fall 2021 Call For Entries? If so you will be emailed with a unique promo code to access the archive for free! If you did not submit and would like to watch/rewatch the judging a purchase option is available.