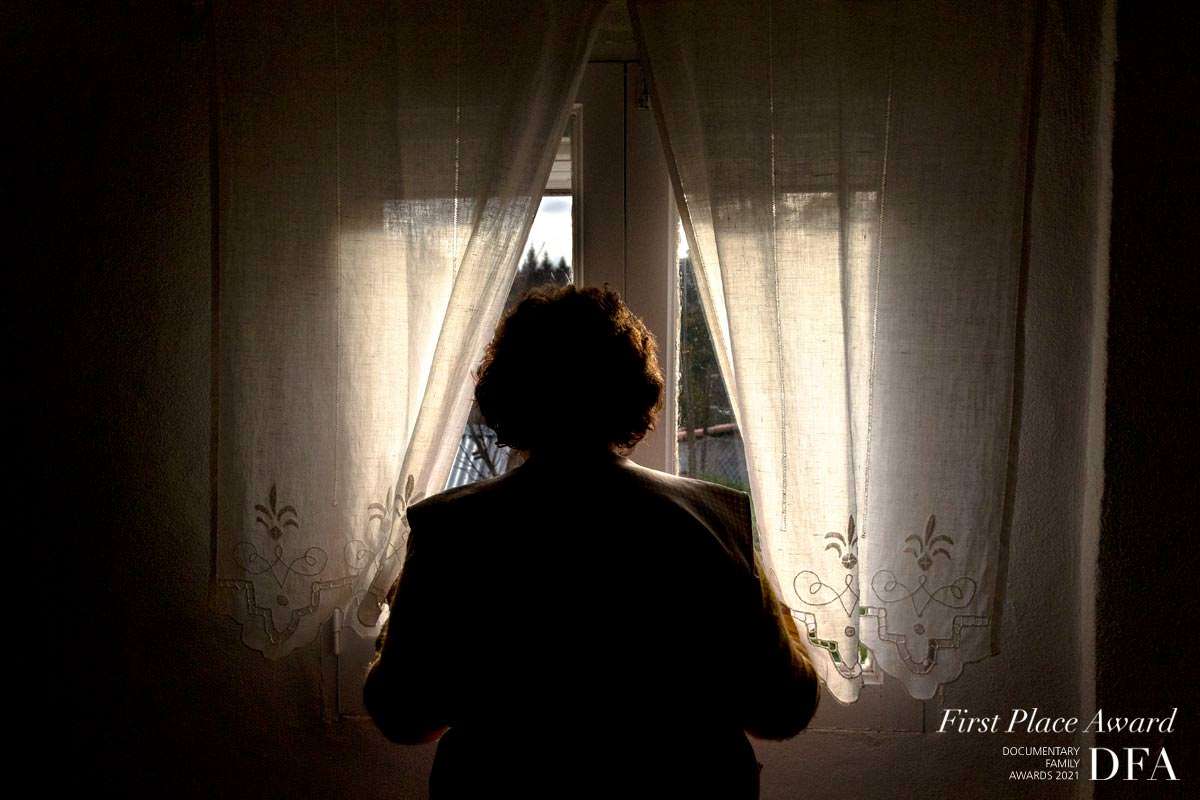 She is 87 years old and since her husband died 30 years ago, she has lived alone at her home in Mondim de Basto (a small village in Trás-os-Montes, in the interior of Portugal). Four years ago, she suffered a serious urgent health problem (whose survival rate in similar situations is only 5%) led by severe sepsis. In only 2 days, she underwent 3 surgeries and went into a coma. She woke up 3 weeks later, confused and without any mobility. A few months later, having recovered, she returned to her home. She didn´t want to move with her daughter and the rest of the family to their city or going to a nursing home. Actually, she decided to continue living alone in her house and is now completely independent, even in the new health care she started to need. At these days, where there is so much talk about isolation and loneliness, this work sets up a simple and sincere way of praising a woman, whose resilience and willingness to live inspires me. It is also about time. About the passing of days, in a time when being alone is no longer an option and has become an imposition. It’s about how We deal with the solitude the pandemic took us to. About getting older. About intimacy. But mostly, about loneliness. A loneliness that doesn’t have to be bad or sad, that is just loneliness and that so many of us have faced in the last months. It’s about living in peace with all of this. This work is about Mariana, my grandmother.

“NOMADELFIA – a family of families“

Its name derives from the Greek terms nomos and adelphia, meaning: “Where brotherhood is law”. Nomadelfia is a communitarian population rather than a community, situated near the town of Grosseto in Tuscany (Italy). It is a small population with its own Constitution based on the Gospel. Founded in 1948 in the former concentration camp of Fossoli by Don Zeno Saltini, its purpose: to give a father and a mother to abandoned children. Words such as: Ties, intimacy, relationships, new worlds, seem to fit perfectly in this particular Italian reality that can be defined as a true and long-lived contemporary utopia. A place where human relationships, both private and collective, merge and become the main pillar of this model. Nomadelfia has its own history, its own culture, its own law, its own vocabulary, its own lifestyle and its own tradition. It’s a population with all its own components: men, women, priests, families and children. In the eyes of the State, it’s a civil association organised in the form of a working cooperative; in the eyes of the Church, it’s a parish and a private association of the faithful. In Nomadelfia, all possessions are shared. The economic resources come from work, from welfare contributions for the children in care, and from providence, largely through the apostolate activities: publishing, evening shows and meetings. In the spirit of evangelical advice, the population of Nomadelfia leads a life characterised by “sobriety”, i.e. on the basis of true human needs. In Nomadelfia, there is no circulation of money. There are no shops but just stockrooms. Foodstuffs are distributed to the family groups in proportion to the number of people and on the basis of the needs of the individuals. Even for clothing, the Nomadelphians use the stockroom, within the limits of their real needs.

Tenure describes the act of holding or possessing, as well as the status granted after a probationary period that protects one from dismissal. A meditation of home and husband, scenes crafted from my latter-day marriage. Ebbing and flowing in a universe the size of a house, we circle round each other as measures in time.

“Love is a Life Story”

Love is a Life Story is an exploration and document about my father’s life. It explores ageing, friendship and family at a time when so many of us were left grieving and alone in isolation. Spending time by ourselves with only our thoughts and memories “We stick together a lot don’t we John.” “Yes yes, you’re my best friend.” John (91) and Mary(96) both dedicated their lives to caring for others. John in the spiritual sense as a minister and Mary in the physical sense, as a nurse. Now they care for each other as friends. John’s mind is pin sharp but Mary’s memory is fading and thoughts sometimes confused. John’s legs are weak and collapse from time to time but Mary is super strong; walking daily. It’s a beautiful balance, they make up for each other’s weaknesses; neighbours at no.19 and no.20. John and Mary’s, friendship and journey through lockdown represents many of our eldest citizens’ experiences as friendships replaced family. As I took these photographs I was reminded of the transience of our journey, and the importance of family and friendship. After all, friends are the family we choose.

“The disappearance of memories”

This project tells the story of people forced to abandon their ancestral city – Hasankeyf. It is located on the route from Upper Mesopotamia to Anatolia, along the Tigris River in Batman, Turkey. Here, aligned with the state’s water policies the Ilısu Dam was constructed despite the fact that, inevitably, historic and cultural heritage would be buried, its precious riverine habitat would be flooded, and people would be de-territorialized. The city, also known as Rock Fortress, is one of the oldest, continuously inhabited settlements in the world, spanning an estimated 12,000 years. Being home to thousands of human-made caves, hundreds of medieval monuments, and a unique canyon ecosystem in the Tigris Valley, this urban establishment was like an open-air museum. With the dam being built the people of the region had to completely leave their homes, lands, memories, and cultural history behind. The most agonizing part of this process is that they also have to undug their lost loved ones’ graves and carry their remains with them. The remains are moved as they have a spiritual value and so people do not forget their past. Although this process deepens people’s agony, they do this to be able to show their ancestors’ graves to future generations and to be able to visit them on special days. The process of the move led to many emotional moments as people re-confronted their past agonies.

A house is not a home without a place to rest, a place to play, a place to nourish, a place to live. The Couch explores the multitude of ways we inhabit space, how we interact with an object, and the way objects interact with us. This ongoing series is an honest look at how a one piece of furniture offers so much more than just a place to sit.

My father suddenly passed away a year after my graduation, leaving me alone with mom. I lived with her until the age of 28, when I got married and left home. In year 1998 I bought a two-story house: my mother came on the ground floor and me and my family on the first floor. Mom left me on July, 10th 2020, close to turning 106. In May 2019 I asked her to find all the photos that portrayed her or father, I chose some of them, brought them digitally and reviewed them according to my feelings; I have added them to the many of her I have taken in over 50 years of life together and, above all, to those of the last few years. And this project was born: dedicated to my mother who generated, raised and assisted me with infinite love; I hope to have returned her, in the last few years of approaching the last trip, a little of that love her gave me along my life. Here I present a condensation of ten images between the over 500 shot.